Home Uncategorized How to Build a Memorable Personal Brand on Twitter

Imagine that you’re within 140 characters of connecting with a customer, prospect, or influencer. How can you afford not to reach out?

We’re talking Twitter, of course: the 300-million strong whirlpool of information that has emerged as a personal branding, relationship-building nirvana.

Twitter pros have found ways to use the platform to score business and media deals — they’ve even built relationships through developing successful Twitter personal brands. Yet, too many people have joined the community simply because they know they should be there, not because they’re strategic or focused.

When it comes to those that have managed to scale their following and build a reputable brand on Twitter, there’s a lot we can learn. To do this, I decided to go straight to the source, interviewing some well-known names with as many as hundreds of thousands of followers.

Thanks to their insights and generosity, I put together a eight-step road map for developing your personal brand on Twitter. Check it out below.

Cheryl Burgess, author and CEO of Blue Focus Marketing, said she started off as a listener on Twitter, following people she admired like Kent Huffman, Tom Peters, and David Edelman, among others.

You see, the beauty of Twitter is that you don’t have to go far to discover a successful marketing playbook. The platform gives you free reign to observe how the pros do it.

Similarly, Neal Schaffer, CEO of Maximize Your Social and cofounder of The Social Tools Summit, says to follow people who are sharing a lot of content and who are omnipresent on Twitter. For Schaffer, that’s folks like Jeff Bullas, Mark Schaefer, Pam Moore, Lilach Bullock, Marsha Collier, and Glen Gilmore.

Over time, in addition to observing Twitter luminaries at work, start to engage them. Influencers, like anyone, appreciate praise. But don’t expect an immediate home run. If the influencer eventually follows you — or even better mentions you — you’ve scored a coup.

If you do directly reach out, see what you can offer in return – a mention in a blog post or article for instance. Burgess said she developed a relationship with Tom Peters by following him on Twitter and also recognizing him as part of a Twitter awards program she was running.

If you’re wondering what impact influencers can have, consider this: Nearly 40% of Twitter users say they made a purchase as a direct result of a tweet from an influencer.

Create Twitter lists of your mentors whom you can then easily monitor. Think of it as having a front row seat to your favorite performers. “Grouping my audience into categories, I see what’s happening across the world quickly and seek opportunities to help and respond,” says Mark Schaefer.
Visualize your Twitter ecosystem using a tool like Mentionmapp. “Mentionmapp helps me decide whom to follow and the conversations I need to be part of,” says Burgess.

Clarify the type of person you want to be on Twitter. Think of this as an opportunity to showcase your capabilities, passions, and interests.

Peg Fitzpatrick, social media speaker, trainer, and author, refers to this exercise as “defining the seeds of your brand.” Fitzpatrick advises selecting two or three main topics for your brand content — for her personal brand, she zeroes in on media, her role as author (and speaker), and marketing.

Mari Smith, social media speaker, trainer, consultant, and author, has done this beautifully, explaining that she shares “quality, cherry-picked content pertaining to social media, business development, and time and life hacks with a sprinkling of spiritual uplift and a daily dose of motivational quotes.”

Focus on three seeds, or go super-niche with one main focus. Do this and “you’ll build a solid Twitter following that will love your content,” says Fitzpatrick.

Ensure that it defines your brand. Dump the default Twitter egg and use an image that highlights your brand, advises Burgess.

Burgess’ own profile leaves no doubts about her accomplishments and her focus: 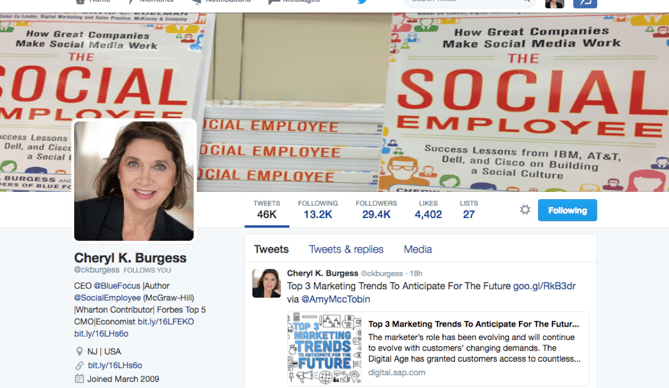 Avoid the pet photos. “Unless you’re a veterinarian or your social media goals aren’t especially business related,” says Burgess, “it’s probably better to go with something else.”

“You can’t tweet enough,” urges Schaffer. This doesn’t mean that you should aim for 100 tweets a day, but if you’re seeing positive engagement, keep it going.

The lesson? Find your rhythm. For example, Michael Brenner, author and CEO of Marketing Insider, says he tweets every hour typically from his smart phone while reading. “I’m a big fan of email newsletters,” he says. “I scan the headlines and if I read the article, I share it.”

While it’s tempting to rely solely on curated content, if you’re serious about building your personal brand, try to post some original content. “The fuel of social media is content,” says Schaefer. “I devote an enormous amount of time to creating original content on my blog which then becomes something I can deliver on Twitter that is helpful and unique.”

Smith says she likes to spotlight up-and-coming bloggers and experts that not many people are tweeting about. “I want to give people a leg up and not just share the same super popular blog posts others were sharing,” she says.

Don’t share content without identifying the source or the author, says Schaffer. Don’t simply say via @HubSpot or @HuffingtonPost. Take the trouble to also identify the author, who will appreciate the mention.
Tweet with an image whenever possible. Posts with images on social media are 40X more likely to get shared. “I tweet 100% of my tweets with images,” says Schaffer.

Twitter is a two-way street: If you reach out, people are likely to engage with you.

“Put aside some time to reach out and engage with the tweets of your followers as well as influencers you would like to build a relationship with,” says Melonie Dodaro, a social selling speaker and trainer and author.

Smith says she “takes a quick peek at someone’s bio and recent tweets to find something to compliment or talk about to create a connection.”

Don’t expect, however, that you can outsource your engagement and be effective. All of the experts I spoke to, despite having massive number of followers, handle responses themselves.

Keep this in mind: “The heart of the brand is you,” says Schaffer, “and your engagements are you.”

Brenner calls relating in social “Give to Get (G2G)”: “Karma works in the social world,” he says. “Share the work of people you admire and they will take a second look at your own work. Over time, you will become an authority yourself.”

“Be yourself. It’s okay to mix business and personal,” adds Gini Dietrich, author and CEO of Arment Dietrich. “People want to know the person behind the brains. And you have to just do it. So many people overanalyze it and overthink it. Just jump in and start tweeting.”

Avoid tactics that look like spam on Twitter. “At first I thanked every single person who retweeted my content,” says Brenner. “But then I just felt like a robot, blindly sending ‘thanks for the RT’ messages. Now I focus on those people who really seem interested in connecting.”
Don’t automate direct messages. Dietrich’s pet peeve is the auto direct message that encourages you to buy something from the person you just followed.
Don’t be blatantly promotional. Don’t say something like “buy my stuff,” says Brenner. “That’s the quickest way to lose followers and anger people.”

Twitter gives you practically instant feedback. Almost as soon as you post something, you can see how it performs.

“Twitter is my number one platform where I share the most content and also the platform where I test content,” says Schaffer. “When I see what resonates, I know what to share on my other platforms, for my newsletter, blog posts, books, and other projects.”

Schaffer says he aggressively uses hashtags on Twitter so he can be found and manage his content, and also so he can compare how tweets with a certain hashtag perform against other hashtags.

Take time to find the right tool for measuring and analyzing. “Find the one that makes sense to you and you’re comfortable with,” says Burgess, who uses Triberr for posting, RiteTag for finding the best hashtags, as well as several analytic tools.

Step #7: Outsource strategically, if at all.

According to Schaffer, you don’t need to outsource any of your Twitter efforts in the beginning. But once you start to scale your followers, consider outsourcing some of the administrative work.

“Outsourcing content curation is one of the first areas busy business owners ought to consider. It’s highly worthwhile and ensures your Twitter presence stays active and relevant,” says Smith. “I’m the only one that replies and engages, though,” she adds, “as I never actually delegate my conversations. I also live tweet events.”

At the same time, don’t outsource so much that your authenticity is lost, says Burgess. “To those that are considering outsourcing, first I’d recommend simplifying. You don’t need to tweet every five minutes and you don’t need to reply to every mention.”

Schaefer says, “I do 100% of my own tweets. I feel strongly that I don’t want to disappoint anybody. I never want to be in a position where somebody is engaging with me and then they discover that it’s not really me.” Schaefer says the only thing he outsources is some of the administration on his account, like managing followers.

Find a system to help you find, curate and share content, says Neal Schaffer, who personally uses Sprout Social. Schaeffer says you don’t need a monitoring tool unless you’re a well-established brand. “The @ mentions of your name are enough for most people.”

Now that you know what to do, you need to devote time each day to just doing it.

Brenner’s advice? “You have to find the time to make small investments in social every day,” he says.

“Tweet once a day. Blog once a week (if that’s all you have time to do). Do whatever works for you and be realistic. It’s amazing what happens after a year. You’ll have sent hundreds of tweets, created dozens of blog posts, connected with lots of great people and learned more than you would have ever imagined.”

Find your focus by following one course until successful and stick to it, says Smith. “Publish daily tweets around your chosen focus. But don’t forget to engage, too.”

These Twitter brand experts have cracked the code. And so can you if you follow these seven steps. Remember the adage: Success is no accident. You have to work at it.

What are your best tips for building a memorable brand presence? Share them below.